WITCH EYES is a series of three books, published by Flux, dealing with a small town full of secrets, a feud between families, and a young boy trapped in the middle.  DEMON EYES will be published in the fall of 2012, and PHANTOM EYES will follow in 2013.

Chosen as one of Amazon’s Best Books of 2011 in the LGBT category!

A boy who can see the world’s secrets and unravel spells with just a glance. 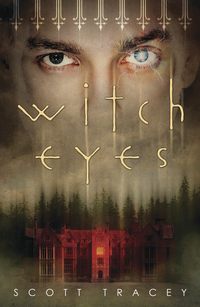 Braden’s witch eyes give him an enormous power. A mere look causes a kaleidoscopic explosion of emotions, memories, darkness, and magic. But this rare gift is also his biggest curse.

Compelled to learn about his shadowed past and the family he never knew, Braden is drawn to the city of Belle Dam, where he is soon caught between two feuding witch dynasties. Sworn rivals Catherine Lansing and Jason Thorpe will use anything—lies, manipulation, illusion, and even murder—to seize control of Braden’s powers. To stop an ancient evil from destroying the town, Braden must master his gift, even through the shocking discovery that Jason is his father. While his feelings for an enigmatic boy named Trey grow deeper, Braden realizes a terrible truth: Trey is Catherine Lansing’s son . . . and Braden may be destined to kill him.

“A bewitching blend of paranormal romance and intrigue.” — Kirkus Reviews

“Tracey spins a clever paranormal story with lots of suspense and intrigue. The complex characters drive the plot and add to the perplexity and mystery.” — School Library Journal

“A fun new entry into the realm of young adult fiction.” — Cleveland Magazine

“Witch Eyes is compelling and elegantly written with a wit that has bite. Scott Tracey has woven a dark, beautiful world, and Braden is just the hero to lead us through it.” (Courtney Allison Moulton, author of Angelfire)

“(WITCH EYES) has it all: great voice, unique worldbuilding, and a sizzling romance that I adored.” (Karen Mahoney, author of The Iron Witch)

Take the Feud Quiz on Facebook!  Are you Team Lansing? Or Team Thorpe?